Showing posts from December, 2020
Show All

Sunshine, after a rainy night, was a welcome sight as six of us gathered at Upton Staithe car park and set off alongside Upton Dyke. Looking west, over Norfolk Wildlife Trust’s Upton Marshes, there were three distant cranes all too briefly in the air. Next to show was a marsh harrier and, while we watched that, a peregrine falcon came into the same field of view. The peregrine settled on a gate on the field, and we saw it there or nearby off and on through the morning. Oby Mill, across the River Bure. Af ter we turned left along the distinctly muddy path on the river wall, most of the activity was across on the other side of the River Bure and its reedy ronds over on Clippesby and Oby Marshes. There were a few groups of pink-footed geese flying around, though nothing that compared with the flock that Howard and Sue saw by the A47 Acle Straight on their way here today. There were at least two marsh harriers and large numbers of jackdaws, rooks and starlings, though most of our effort we
1 comment
Read more 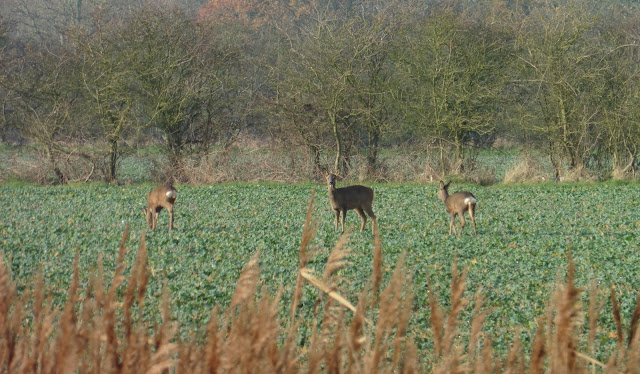 For our first walk after the autumn lockdown, six of us met at the National Trust’s Horsey Mill car park near the east Norfolk coast. For the early arrivals there was the distant sound of cranes bugling and the sight and sound of moving pink-footed geese. Morning mist turned to sunshine as we found a route through a wetter than expected start to the path towards the distant dunes of sand and marram grass that make the sea defences here. Conditions then became easy once we were on the permissive path through this part of the Horsey Estate. Here three roe deer surprised us, then stood and watched us as we watched them in a field of oilseed rape. Roe deer. A sparrowhawk dashed away low over a crop along a hedge line then helpfully returned, the large, brown female settling in a tree. Fieldfares flew over at the same time and we had several sightings along the next part of the route. A uniformly brown marsh harrier and a male stonechat were two more good birds. Mary was alert to a yell
Post a Comment
Read more
More posts