Showing posts from September, 2021
Show All

There were just three of us on today’s Honeyguide outing, but what a perfect day it was as we arrived at the very new Broadland Country Park – announced in just March this year – between Horsford and Felthorpe. We started by looking over the heathland by the new picnic benches, which was colourful with heather, bell heather and western gorse. We didn’t go onto the heath as it’s fenced for grazing, part of the conservation management of the site. We took an anti-clockwise circuit around the country park, past another area also fenced for grazing and with sheep on view. We also heard cattle somewhere, but we didn’t see them. Dock bug (left) and spiked shieldbug (right). Garden or cross spider. Like a hot cross bun with legs, says Tessa. To start with we looked at the ID of various wild flowers, then swiftly switched to bugs on finding the two species in the photographs, names added after looking them up later. And we found a grey dagger moth caterpillar.  We moved into a large area of
2 comments
Read more 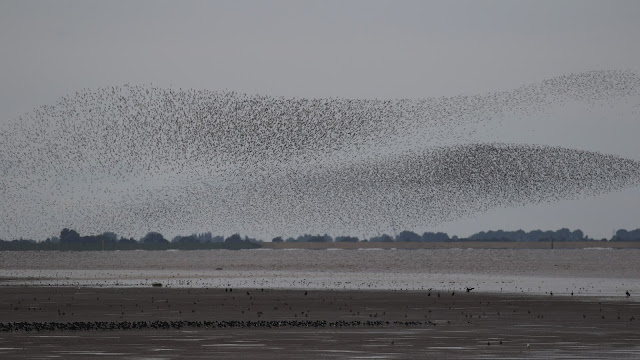 We arrived at Snettisham an hour before high tide and parked up on the sea bank overlooking The Wash. The tide was coming in quickly  –   T he Wash has the greatest tidal range of any east coast estuary at 6.5m during spring tides  –   and there was a constant movement of wading birds in front of us as the mudflats were covered by the incoming tide. Swirling waders, Snettisham. There was a large flock of oystercatchers out on the mudflats and several small groups of redshanks flew over our heads to roost on the islands in the lagoons - the flooded remains of old gravel workings. Although the high tide wasn’t high enough to fully cover the the mudflats, we still enjoyed the spectacle of swirling flocks of knots.  Swirling waders, again. More swirling waders. There were also some large mixed floc ks of waders closer to us on the mudflats and we were able to pick out dunlin, sanderling, knot, ringed plover, grey plover and bar-tailed godwit. A mixed flock of common and Sandwich terns sat
Post a Comment
Read more A day of two halves, starting with three of us walking the circuit around Potter Heigham Marshes on a morning that followed the recent pattern of cloudy and relatively cool weather for the time of year. We moved fairly quickly along the back of the chalets that line this part of the River Thurne, reaching the elegant, converted mill, now a rental property, its traditional drainage role now replaced by an electric pump in a functional building nearby. Drier marshes had dozens of Egyptian geese. These were greatly outnumbered by greylag and Canada geese once we arrived at the series of lagoons, created here by a partnership of the Environment Agency and Norfolk Wildlife Trust to offset losses on the coast driven by coastal change. Little egrets with greylags and ducks, Potter Heigham Marshes (digiscoped). A great white egret was a very good bird, though these days no longer a surprise, and soon there were about four little egrets as well. Scanning the countless greylags revealed a sing
Post a Comment
Read more
More posts