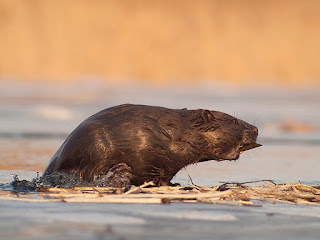 "Beaver: the second largest rodent in the world and the biggest one in Europe, known for its very interesting behaviour. Biebrza the river was named after the beaver and in old Polish language Biebrza means ‘beaver's river’. Considering that now it is a very numerous mammal it may be hard to believe that in the beginning of the 20th century beavers became extinct here. They were reintroduced to Biebrza again from Russia after WW2.
"Beavers have a high sense and knowledge of water engineering, reflected in building dams, creating ponds, building lodges and digging corridors and chambers in the ground. Doing this process, beavers improve local environmental conditions for other animals yet sometimes may be in conflict with what man would not like to see, such as flooded meadows or broken trees. 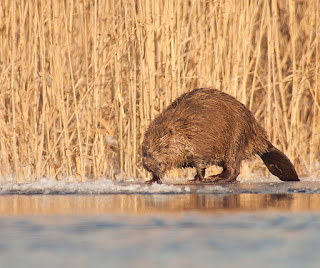 "Beavers do not hibernate over winter time so they must prepare themselves. They cut small tree branches and pile them underwater to eat them over winter when rivers are frozen and they have no access to fresh food.
"The beaver is rather a shy creature with a nocturnal life style. Of course you can see them once in a while over a long period. Again, winter seems to be a good moment to watch them. In warmer days when ice starts to get melted you can see beavers enjoying themselves on the ice eating fresh willow branches and doing their ‘manicure and pedicure’. "

This is a kind of book review … though it might be more honest to describe it as a plug for a splendid publication that dropped through my letterbox very recently. ‘Norfolk's Wonderful 150’ is a slim volume described as ‘A collection of special species from Norfolk to celebrate the 150 th anniversary of the Norfolk & Norwich Naturalists’ Society’. The anniversary was actually 2019; various practical things delayed the project and it’s well worth the wait. Here’s the plug: it’s available by post – follow this link -   for just £10 including postage. As I'm a member of NNNS mine arrived free of charge, which is even better. Norfolk's Wonderful 150. I should declare an interest. I was asked (and I agreed) to write the account for common crane, then later for little tern as well. Honeyguide leader Tim Strudwick did rather more, namely five accounts for solitary bees and wasps, for which he is the county recorder. The outcome is accounts of 150 species that all h
Read more

Early on in lockdown a lady phoned to ask if I could help to identify a plant from some photos. I recognised the odd-looking yellow-green umbellifers as perfoliate alexanders (spelled here with a low case A despite the name coming from the Egyptian port of Alexandria). Perfoliate alexanders, Norwich, 25 April 2020 (Roger Jones) Perfoliate alexanders is a flower I hadn’t seen in the form shown here, though it is similar to a flower I know from Crete. More of that later. The photos had been taken by Roger Jones, and I know Roger & Jenny well. They live not far away and often come on the guided walks at NWT Thorpe Marshes, contributing their knowledge and enthusiasm there and, like me, on the NWT’s blog and elsewhere. Roger had photographed the perfoliate alexanders near the River Wensum in central Norwich, not far from picturesque Pull’s Ferry. Armed with a name, he quickly tracked some other records by experience botanists in a national database. One of those no
Read more

There were just three of us on today’s Honeyguide outing, but what a perfect day it was as we arrived at the very new Broadland Country Park – announced in just March this year – between Horsford and Felthorpe. We started by looking over the heathland by the new picnic benches, which was colourful with heather, bell heather and western gorse. We didn’t go onto the heath as it’s fenced for grazing, part of the conservation management of the site. We took an anti-clockwise circuit around the country park, past another area also fenced for grazing and with sheep on view. We also heard cattle somewhere, but we didn’t see them. Dock bug (left) and spiked shieldbug (right). Garden or cross spider. Like a hot cross bun with legs, says Tessa. To start with we looked at the ID of various wild flowers, then swiftly switched to bugs on finding the two species in the photographs, names added after looking them up later. And we found a grey dagger moth caterpillar.  We moved into a large area of
Read more