Why did cranes come to Horsey in Norfolk? 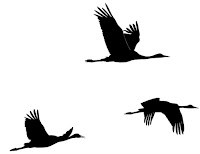 It’s 40 years since cranes returned to the Broads in Norfolk having been absent as breeding bird from the UK for some 400 years. Chris Durdin, co-author of The Norfolk Cranes’ Story, tells their story.

This is part 2 of four blogs. The full story is in The Norfolk Cranes’ Story book, which recently came out in paperback. See www.norfolkcranes.co.uk for how to buy a copy.

Why did cranes come to Horsey in Norfolk?
What we didn’t know in the 1980s is that cranes in eastern and northern Europe were increasing in numbers and their range was spreading westwards. With hindsight, that first colonisation more than three decades ago looks almost inevitable. At the time, it felt like the cranes had a very tentative and vulnerable toehold in Britain.

Why choose Horsey? The coastal location plays a part, for a migrant bird. It’s a relatively quiet part of the Broads, with large and undisturbed reed and sedge beds suitable for nesting. These are close to open grazing marshes and arable where the cranes feed for much of the year.

An additional lucky element for these colonising cranes was to be on John Buxton’s local patch. He became the cranes’ guardian. Helping John was a team: for several years both the RSPB and Horsey Estate employed crane wardens who did guard duties, as we were worried by the risks of disturbance and egg-collectors.

Numbers grew slowly but steadily during the 1980s, helped by additional migrants joining the group at Horsey. There was a worrying lean period with no new young from 1989 to 1996, but then at least two young were fledged in 1997.

It wasn’t until the new millennium – in 2001 – that cranes nested away from Horsey and two years later, in 2003, they nested at Norfolk Wildlife Trust’s Hickling nature reserve for the first time.

A bigger step was the first breeding cranes away from the Broads. That was in 2007, when a pair nested at the RSPB’s Lakenheath Fen nature reserve in Suffolk, following a big influx of migrant cranes into the UK. These birds are part of a scattered group in the Fens.

Hundreds of people every year enjoy the sight of flying cranes or hear their evocative bugling calls in Norfolk and beyond. John Buxton died in 2014, but he leaves a remarkable legacy. Cranes may never be common, but John’s determined, patient work in those early days has paid off and their future looks assured.