No sooner had we set off from the Holgate Hill car park, an impressive minotaur beetle had cameras clicking as it clambered on one group member’s sleeve. A favourite food for stone-curlews in the Brecks, said our guide Rob Lucking.

Shortly after crossing the railway – later we enjoyed seeing one of North Norfolk Railway’s steam trains – we were lucky to have extended views of a Dartford warbler, in and around low clumps of gorse. The Dartford warbler continued to show well, if briefly, having crossed to the other side of the path. With it were not the expected stonechats but instead linnets, which seemed to be plentiful here and later by the coast.

We did a circuit of this part of the heath, telling stories of nightjars watched here while staying on the adjacent camping and caravan park. The route includes a fine view down to Weybourne church: what looked like crenellations on the church are part of the remains of a 13th century priory.

We re-crossed the railway line and on the edge of the footpath near the firebreak were heath milkwort flowers in both blue and dark pink.

We drove closer to the coast to Kelling Reading Rooms, an appealing & eccentric mix of second-hand shop and café, for coffee and loos. Those with the group for the afternoon session had their picnics in their cars, parked by the roadside stream.

Over the coast road we walked along the alexanders-fringed path. Hearing a cuckoo was the highlight here, plus glimpses of another flying away – a russet-plumaged female. We continued to hear the male and get distant views of the female through the afternoon.

There was a white wagtail by the cattle inland of the biggest lagoon. That water body had avocets, shelducks and gadwalls. But the star bird was on the short grass on the seaward side: a whimbrel, feeding briskly, taking short flights and calling from time to time, but often still enough for outstanding views.

We clambered the shingle ridge and looked out to sea, though the best bird was behind us: a wheatear. We followed the path to complete a circuit alongside the WW2 sea defences showcased at the Muckleburgh Military Collection. 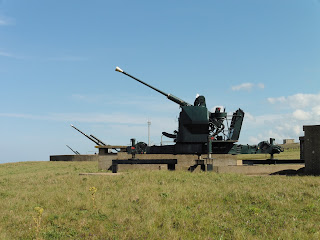 A stonechat, lots of linnets and a soaring skylark were among the birds here, and a small hawthorn had a cluster of brown-tail moth caterpillars.